Dr. Jerry Halpern is one of the most respected Oral and Maxillofacial Surgeons both in New York City and the United States. 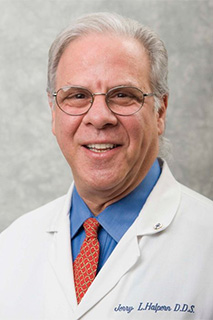 Dr. Halpern received his Bachelor of Science degree from Fairleigh Dickinson University. He then received his Doctorate of Dental Surgery degree, graduating on Dean’s List from Howard University College of Dentistry. Upon graduation, Dr. Halpern was accepted and completed four years of residency in General Practice followed by Oral and Maxillofacial Surgery at New York Presbyterian- Weill Cornell Medical Center.

Dr. Halpern has lectured locally and nationally at Memorial Sloan Kettering Cancer Center; New York Presbyterian-Weill Cornell Medical Center; Greater New York Dental meeting; the American Association of Maxillofacial Prosthodontists and the American Association of Oral and Maxillofacial Surgeons, on topics ranging from dental oncology, cancer reconstruction of the fibula free flap with implants; bisphosphonate-related osteonecrosis of the maxilla and mandible, the impact of dental forensic identification on 9/11. The forensic odontologist” Dentistry’s Detectives. He has also published papers on bisphosphonate-related osteonecrosis of the jaws in cancer patients, as well as fibula free flap implant reconstruction.

Teaching and mentoring is part of Dr. Halpern’s mantra. For over 30 years as an attending oral and maxillofacial surgeon at New York Presbyterian- Weill Cornell Medical Center and Memorial Sloan Kettering Cancer Center, he has imparted his wisdom, skills, and life’s experience to his residents.

In 2018, Jerry began teaching clinical oral and maxillofacial surgery at the Touro College of Dental Medicine. This being the newest dental school in New York State in 50 years.

For the past nine years in conjunction with three local dental schools, the New York Academy of Dentistry, and hospital oral and maxillofacial surgery residents, general practice residents, and dentists, he has traveled to the Dominican Republic to treat underserved children, plantation workers, and medically compromised HIV patients. This work led to the building of a six chair clinic. This work and clinic is now part of the World of Smiles Foundation of which he is President.

For his work during 9/11, Dr. Halpern received awards from the U.S House of Representatives, New York State, New York City, the American Association of Oral and Maxillofacial Surgeons, and the Chief Medical Examiner of the City of New York.

In 2010, Dr. Halpern received the Presidential Achievement Award in Oral and Maxillofacial Surgery. This award given by the Board of Trustees to recognize a member or fellow for important long-standing contributions of benefit to the specialty of oral and maxillofacial surgery through clinical, academic, research, or public service activities. This is one of the highest awards given by the specialty of oral and maxillofacial surgery.

In 2018 at the 100th American Association of Oral and Maxillofacial National meeting Dr Halpern was again recognized by receiving the Humanitarian Award. This award given for his continued humanitarian work here and abroad.

As a surgeon, educator, and friend, Jerry continues to foster the trust, respect, and admiration of his patients and peers. This reflected by his continued energy and love of his profession.

Jerry was born in Astoria and grew up in Laurelton, New York. He is married to his beautiful wife, Pamela, a former Radio City Music Hall Rockette, and has three wonderful sons, Stephen, Josh, and Michael. Jerry loves spending time with his family, hiking, swimming, relaxing on the beach, and enjoying great food.